Menu
Log in
Register
Navigation
Install the app
More options
Contact us
Close Menu
You are using an out of date browser. It may not display this or other websites correctly.
You should upgrade or use an alternative browser.

Use this thread as a place to check in and to post updates as to how things are going in your hunt. Heading out? On the road? Made it to camp and have cell service? Hearing bugles? Got one down? Let us know! It's a great way for those who aren't currently in the woods to live vicariously through you! Also a great place to share any information on how the elk are acting in a particular state or general location (don't use specific units please).
R

I've been out 3 times. I caught a glimpse of a couple elk I spooked. That's been it for elk. I have seen a handful of deer and 7 black bears. Lots of bears in this area the last couple years. Other than that the only things to report are extreme heat (for north Idaho) and billions of hornets. I've never seen the hornets as bad as they are this year. Weather is supposed to cool down next week so I will be back at it soon.
R

The elk hunting this year had been as slow as this forum. I had only heard one elk bugle before I got into this elk. The other elk answered and the wind was in my favor. I was debating what to do when I felt the wind switch. I wasn't too worried because I didn't think the bull was going to come in. About a minute later there he was, 90 yards below me sniffing and then he was gone. After that a camp moved into the area and they don't appear to care about gate closures because they are riding 4-wheelers and side by sides behind all of them and bugling from the seat. There seems to be zero enforcement of the gate closures in this area so other than ruining there own hunting and everyone else's I don't see why they wouldn't ride around the gates.

A couple days later I was trying to find a place to go that wasn't being actively logged when I stopped at another gate I have hunted behind quite a bit in the past. I hadn't hunted there in years because there is usually a camp there. No camp this time so I went in.

I bugled from a spot in a creek bottom and got an answer from above. I kept calling but he didn't say anything else. I moved up thinking I was closer and called again. He finally answered but was lower on the hill than I thought. I went back down to get the wind right and while I was heading down he bugled again. I didn't answer because I didn't want him to know where I was just then. I think he didn't like that I didn't answer. He was barely bugling but after he did, and I said nothing he started bugling more and more. By the time I got back to the bottom he was bugling about every 2-3 minutes.

I was thinking he had cows with him and wouldn't leave them. Beings he was sounding off regularly I started sneaking up after him. I had planned to get close and call again but it was quiet enough that I could sneak around pretty effectively so I channeled my inner Chuck Adams and I tried to sneak into bow range without saying anything. I got close but he was moving up and left towards a water source that I figured they were headed to. I could hear that I was close but couldn't see through the brush until we got higher and it opened up a bit. After following him for around 500 yards I caught a glimpse of him and he was in bow range.

I started ranging things hoping he would move into the open for a shot. I was getting ready to follow him up some more when he turned and started walking down to a bush I had just ranged. He popped out at 45 yards and I plunked him. He only went about 40 yards before tipping over in a hole.

First elk I have ever shot with a bow that I didn't call in. It was a pretty exciting way to hunt him. It has been so dry and noisy the last several years that sneaking was pretty tough and had never worked out for me in the past.

I thought he had cows but if he did I didn't see any and when I was on his tracks it only looked like one set of feet had gone up in front of me. I'm not sure why he just kept bugling instead of coming in if he was alone. Maybe he was call shy. This area gets hit pretty hard.

Only other items of note that had happened so far this year involved predators. Once when my parents were hunting another area they set up and went through there whole calling sequence with no responses. After waiting a bit they caught a glimpse of something moving in. They couldn't tell what it was till it popped out in front of them. They said it was a pretty big mountain lion. No photos but pretty cool to call one in.

The other thing happened to me. I went to a spot to hunt and was there early but loggers and logging trucks had driven up the road ahead of me already. I got out of my car to go into my area when I noticed tracks in the road. I went over to look at them and saw that they were the biggest damn grizzly tracks that I have ever seen. He went right into the same area I was headed for. He had come by after all the logging activity but before I got there. I went somewhere else that day. 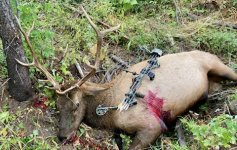 Congrats Ribo!!! My archery hunt ended unsuccessfully. Got into some bugling action, but the wind switched on us and they disappeared. Learned a lot more about the area though. Can't wait to get back out there next year!!
J

Been hunting since the 18th. Ran into two cows and one bull. The bull just didn’t work out. Yesterday I did a nine mile loop through a two year old burn (it sucked). There was so much blowdown. Seen a lot of moose. Called in 2 hunters tonight but I figured they would be catch and release. I’m hunting unit 14

Preparations are in full affect for the 1st season rifle hunt. Heading out on Friday morning. Appears, as of now, to be hot and dry for the week. Time to go fill the freezer!
J

Back home and now getting everything ready for my second rifle deer hunt in area 2. Can’t wait for that. Another 18 hours in the truck coming up the 26th
R

I still have a cow tag that I am trying to fill. I have seen 7 bulls and called in 2. I still haven't laid eyes on a cow. I thought the cow tag would be a piece of cake to fill. It goes till Dec. 31st so I have plenty of time. I also have 2 deer tags.

The regular elk season opens tomorrow and the woods will be full of people so I will do some work things and probably go duck hunting till that gets over. My dad and I went out for the duck opener and did ok. We got 6 ducks and 3 geese. We never do great on opening day and this year the weather wasn't helping. Warm and sunny is great for working outside but not the best for hunting.
R

So I hunted the Three Forks Ranch with a RFW tag. First I have to say this is a top class operation. John Kerr and his staff of guides were awesome. The area was scenic and classic elk country. I saw elk every day. Did get some snow which for me made it way harder. This is a classic elk hunt with lots of hiking. I’m in my sixties and was huffing and puffing like a freight train. Dan, John, and Dave were great guides. They were skilled and knew the terrain and tendencies of the elk there. On my last day of hunting was paired up with another hunter who had just turned seventy. Got to see him take a nice cow out of a balled up group of about a hundred elk. His excitement was contagious. Dave the guide and I hiked up following that group, but elk can make way more ground than we can. Did not get to fill my tag as I had to cut my hunt to return to my commitments. Not a single regret at all with this experience. Have to say that the RFW partnership with CPW and these ranches provide an awesome opportunity for Colorado hunters. If you have the opportunity I would recommend Three Forks without any hesitation.
R

Sounds like a good time. Are there any photos?

Sorry to hear you didn't fill your tag Randy but sounds like a great experience. Can you share more about how the hunt works? You were paired up with other hunters and had guides? Do you have to leave a gratuity then? Sounds interesting as I've always been under the impression that, for RFW hunts, they give you your map, maybe a few tidbits, and send you on your way.
R

On Three Forks RFW hunts they provide a guide and transportation on the ranch. Two hunters are grouped with each guide. There are two hunts a day 6am and 3pm. new hunters check in at 3pm and start hunting that day.. If unsuccessful you keep going back until successful, or in my case have to return to commitments. Three Forks covers all the guide costs and is a non-gratuity operation. These folks set the bar in my opinion. The guides put in 100% efforts to help the hunters be successful.
They take great pride in being the best. The three guides I hunted with had been there 17 or more years each guiding paying and RFW hunters on the ranch. John Kerr who is the ranch manager is actively engaged in making this a world class organization. My observation and opinion.
You must log in or register to reply here.
Share:
Facebook Twitter Reddit Pinterest Tumblr WhatsApp Email Share Link