Menu
Log in
Register
Navigation
Install the app
More options
Contact us
Close Menu
You are using an out of date browser. It may not display this or other websites correctly.
You should upgrade or use an alternative browser.

My Mom found a big set of non-typical whitetail sheds a couple years ago. I had set out some trail cams in the area hoping to get a photo of him but I never did. This can be kind of a wintering area so there wasn't any guarantee that the deer lived here year round. My parents had a camera out the last couple weeks and look who walked by.

This is either him or one of his kids. My parents pulled there camera but I am headed back tomorrow to look for a doe for my antlerless tag and I'm going to hang my camera over some scrapes that are in this same area and see if I can get some more photos of this buck. A lot of people have been in this area this year. Way more than I am used to. So it would be nice to get some photos of him after the season.
D

Awesome picture! Nice buck too
I hope you catch more pictures or even some sheds
R

I haven't got the camera hung yet because someone was hunting that area when I went back to hang the camera so I hunted somewhere else. My Dad is hunting there today and he is texting me that he is watching a small herd of elk and muzzleloader elk starts tomorrow so I am guessing we will be in there tomorrow.

The sheds my Mom found were a couple years ago and that would make this buck about 7-8 years old. The deer in the photo doesn't look that old to me so I am guessing this is one of his kids.

I talked to a guy that was hunting in here after we got the trail cam photo and he said he shot a buck and found blood but no deer. He didn't want to elaborate on how big the deer was. Hopefully he makes an appearance on camera to confirm he made it through the season which ends today.
R

Got a photo of the sheds from this same area.
D

ribo451 said:
Got a photo of the sheds from this same area.
Click to expand...

That is a dandy buck!
R

I finally made it up to get my camera. It had been there for 5 months and I was hoping to get photos of the big guy pictured earlier but no luck on that front. I did get one buck and my first pictures of a bobcat.

Half of the photos turned out really red. I don't know why. This happened one other time and then it seemed to go away. Pretty annoying when you leave a camera up for 5 months and over half the photos aren't able to be looked at. I bought a Bushnell camera before and that one had a problem with the trigger sensitivity. I hung it for two months and when I went back to get it I found it had filled the memory card with 2000+ photos of nothing in 4 hours. I sent that one back and this one is the camera they sent me as a replacement. I won't be buying another Bushnell but I do want to get a camera and get it hung soon because I have a few waterholes I would like to hang a camera on over the summer. If anybody has suggestions for a good camera aunder $200 I am interested in opinions.

I did see 2 turkeys, 14 elk, and one really light brown black bear. Two of the elk were bulls. They didn't have much for antlers yet and looked like they would probably be raghorns by there body size but they appeared to be made of meat so I might be interested in them this fall.

I have had good luck with Moultire cameras. The most recent I've purchased are the A20i and those have been great. I'm pretty sure I was able to find them for under $50 too.

Where is the pictures? :?
T

Pretty good kill on this weekend. This bad boy was heavy as hell, probably one of the biggest I've ever got! Also was my first time using CZ 527(never tried any 7.62x39 ammo for deer, but it ended up holding pretty well).
Sorry for the brightness on the camera, I think something messed up, but it was all I've had on hand at the time. 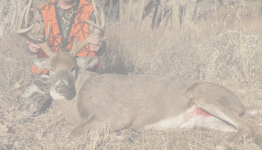